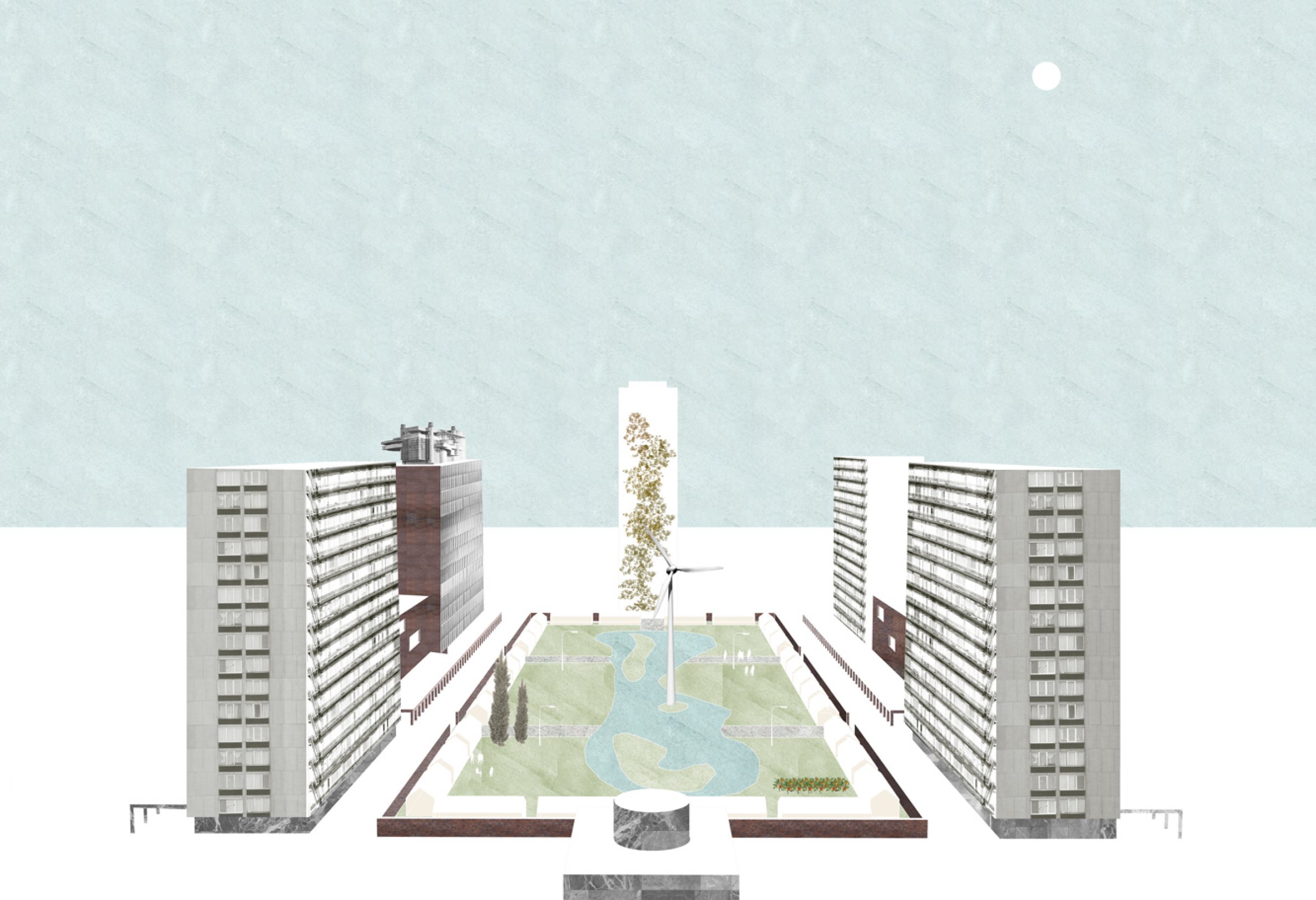 This research proposal is a part of the selection of pilot projects for collective living, where five teams looked into the potential of new living shapes in Flanders. The study starts from a current need and its urgency: in 2030, Flanders is in need of more than 300.000 new houses. We believe that the majority of this production must be realized in an urban area, where each step towards more compact living will be a balancing exercise. We focus on the 20th century territory of the suburbs based on the premise that this rather hard to define area is a rough diamond and an almost unexplored terrain. In the past decade the historic city center and its 19th century belt have been documented extensively, resulting in an arsenal of both tested and valuable instruments and well-known good practices, often starting from the building block itself.

The 20th century project, however, is still unfinished: the paradigm of the suburbs as an archipelago city, a chain of îles flottantes or scattered ensembles in a broader field, offers latent vacancies when studied more thoroughly.

A large part of this territory splits itself in recognizable blanks. What’s the renewed ideal in this area? Is densifying the only bonus? Where’s the dowry hidden?

When making an inventory of the heterogeneous suburban tissue of Antwerp, we recognize a canon of readable and typical ensembles, which we define as type contexts. Five of these type contexts are subjected to two intrinsically different design strategies in the research by design: regeneration and mutation. When regenerating, the existing ensemble is exalted. When mutating, the ensemble is enriched with a new logic.

The suburbs show their potential in a number of collages: the majority of the existing ensembles appears to benefit from a high level of compaction. Because of their heterogeneous character, they offer opportunities to redefine cycles and ecologies in the city in an inventive way. Furthermore, they seem to be receptive of new forms of collectivity, because of their often dormant but recognizable qualities.

The second part of the study: ‘pilot projects living’ focusses on a casus in front of the Meulestede, an offshoot from the suburbs of the port of Ghent. The initial question, to design a CLT project of 25 units, is transformed  into a masterplan for the overall district. The plan combines a strong densification (+120 units) with an increase and upgrade of the available public space. New living formats are presented, answering the need for a pregnant housing question.

By dividing the space in an innovative way and taking care of land management, five clearly phased construction stamps provide a wide range of new formats of collective living, motivating the ambition to live together. Some of the solutions are rather cautious, other downright explicit.

Although the neighborhood is densified,  more public green space will be available in the long run per resident, due to extra, collective green zones. Thus we achieve a density of 53 houses per hectare, aiming for a city-like density, with the preservation of the scenic aroma. We add new inhabitants to the concept, living together around a collective compound. A residential alley is shared with the current inhabitants, signing up in the CLT project with far-fetched agreements around ground-sharing.

When looking into the shape of the design, the masterplan is an interpretation of the ‘landurban living’, which has been theoretically explored in the first part of this study. In the end, this strategy proofs to be useful for several suburban areas in Flanders. Mere densification that does not take the crucial criterion of public openness into account, is disastrous for the overall living quality of a neighborhood. Public space in the suburbs serves as a rural collateral and requires a different approach in regard of the residential stamps. Rather then, closed traditional building blocks with private courtyard, the stamp is a loosely tied ensemble, kept together by a hedge, a garden wall or other subtle demarcations. The stamps answer in this way to the ambition of rural living: a marriage parfait of a dense footprint with an open and green structure.

At the very end of  study area of the second phase, we finally develop a real building project. The northern part of the Meulestede peninsula shows itself as a fragment of a village, completely constricted by the port infrastructure. Here the port begins and the city ends. An intertwining of fragments of building blocks and old workers quarters with slabs from the 60’s and social housings from the 70’s surround the 18th century Sint-Antonius Church, that feels orphaned, ever since the demolition and disappearance of the buildings in front of Meulestede.

Our proposal chooses not to choose. The project tries to repair the emptiness and reconcile the two fascinating scale levels of the quarter. We opt for one clear building block, yet with different addresses. In the Albatrosstraat, the original cul-de sac is restored, taking the shape of a car-free and green alley, with ground-bound houses.

Along the side of the outer port, four new warehouses appeal to the maritime character of the district. The Redersplein is brought back into proportion, without losing its perspective on the new Meulestede bridge. The planned high-level accent has been designed as one of the warehouses.

On the south side, the building block shows itself as a cloister wall with trees, while on the north side, a small atelier protects the district and the inner area. Due to the location and the design of the buildings and the inner space, the noise from the New Orleans street is strongly buffered. A new natural and dense bush on the slopes creates an additional filter. The Redersplein and the quay are equipped with large trees, the existing trees on the terrain being recuperated.